Today The Replacement Fiance released at midnight and other than an announcement on Facebook. Twitter, and my blog, only one or two fellow authors shared my FB post. I did have a few ads lined up and here they are:

This one only had 93 preorders which worked out okay since none of those early preorders can help with rank in the store on release day. So I was actually hoping people would wait until the book released before buying it then. 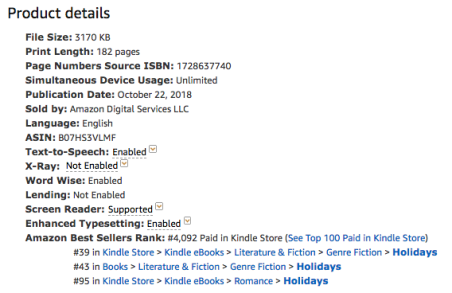 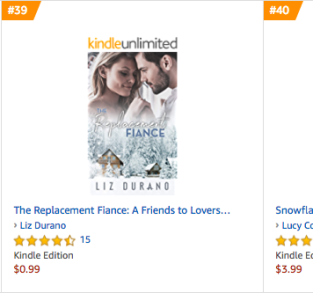 Since my AMS ads spent their budget and the other hasn’t been approved yet, I guess my rank will drop from here on. I don’t know if people are buying from FB but after the initial $30 that I’m spending, I’m going to let it all be AMS ads from here on while writing the second book in the series.

That’s where I failed with this experiment. I should already have had the second book on preorder for 2.99 but I didn’t. Oh well. I hope I’ll get the second book done by November 17 which is when I need to put it on a free promotion and at the same time have the second book at 2.99 already.

Still, it’s a good experiment so far. The Replacement Fiance is about 32k words and it’s a sweet holiday romance that I’ll probably expand as I go after the holidays. For now, the priority is writing the second book in two weeks and getting it done.