Today the Lil Dude and I spent the day at the Battleship USS Iowa. He had a Lego class in the morning and I got to write a little bit on my phone while he assembled the morning’s project which had to do with gears. In the afternoon, a young man named Gil took the kids on a tour of the deck after we had lunch at the Mess Hall. They learned how pulleys work—and I did, too.

After the class was dismissed for the day, the Lil Dude wanted to check out the gift shop which meant we had to start from the beginning. I had to turn in my annual family pass anyway and so we started the tour officially from the beginning. I like how they have a “Find Vicky” kind of game. Vicky (short for Victory) was the captain’s dog and apprentice mascot for the ship in the 1940’s and her photo is posted in various parts of the self-guided tour and kids would match the number to the location on the ship. To find all ten instances of Vicky meant climbing a lot of steep ladder/stairs and at first, the Lil Dude was afraid of them, but once he got the hang of it, he was fine. 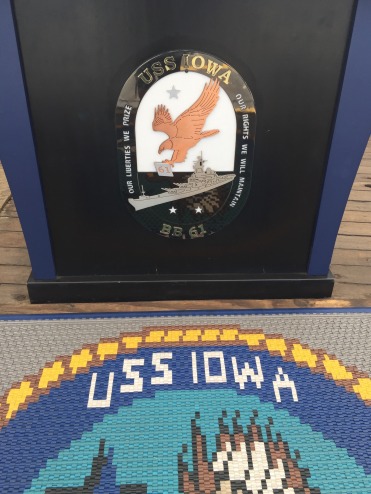 One of the things that struck me about the museum is that it’s not funded by the city, state or the federal government. Battleship USS Iowa is fully funded by admissions, memberships, and donations. Everywhere you look, there are (Navy) veteran volunteers who are more than happy to give you a personalized tour of the ship and whenever a military veteran or active duty military personnel visits, his/her arrival is announced on the loudspeakers complete with branch and years served or if active.

In 80 degree heat, I have to admit we’re both sunburnt and by 9, Lil Dude was cranky and went to bed without any additional prompting. Now I’m trying to write but I think my brain is pretty fried, too. I’ll probably end up writing on my iPad in bed until it smacks me in the face.

And I must really love romance because guess what my favorite feature about the ship is?

Yup. You know me too well…

6 thoughts on “On Board the USS Iowa #Momlife”