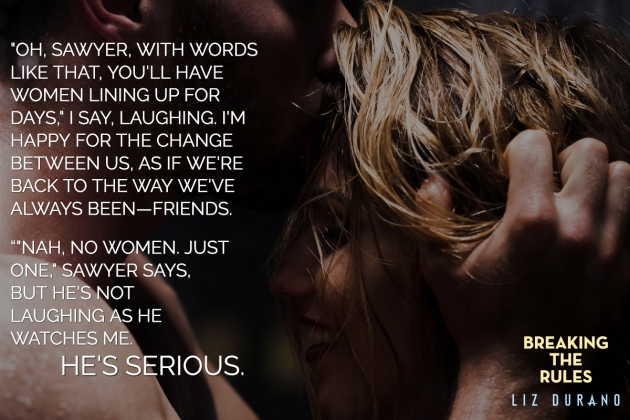 I hand Tyler to him who doesn’t protest one bit, his attention riveted by the house in front of him, his eyes wide. Biting my lip, I take the keys from his hand, and with trembling fingers unlock the door. Sawyer follows behind me as I step inside and the first things I notice are the plants. They’re in planters right inside the south-facing windows and another one in front of the living room and kitchen. I recognize herbs and vegetables like kale and broccoli, snap peas and green onions.

“This is amazing,” I whisper as I stand in the middle of the living room with its stone floors and adobe walls, some of them inlaid with the glass bottle bricks he was telling me about earlier. Sure enough, they reflect light from outside and cast different colored hues on the opposite wall.

“I’m glad you like it, Al. I hope you’ll enjoy it here at the Willow,” he says as he guides me through the house, telling me about the features common in Earthships like air vents that I’ll need to open during the day to allow hot air out and shut at night, as well as the solar power panels, a water filtration unit, and a recirculation unit for the planters. There’s a washer and dryer that runs completely from converted solar power, as well as a full kitchen setup with a stove and oven, refrigerator and microwave, and a big-screen TV. Other than being located in the middle of nowhere, it looks just like a regular house. Just a tad quirky but beautiful.

By the time he hands me the lease to review and sign, I’m in tears.

“Oh, Alma,” Sawyer murmurs as he pulls me against his chest with Tyler sandwiched in the middle. My body is wracked with sobs that I can’t stop, like a dam finally breaking.

“I’m so sorry, Sawyer. I don’t mean to be so emotional like this.”

“It’s okay. I’d have been offended if you didn’t feel anything. I worked hard on this thing,” he whispers, chuckling and I’m grateful for his sense of humor. In his arms, his manly scent envelops me, reminding me of the ocean blended with sage.

“Maybe it’s all that sage everywhere,” I say, sniffling as I pull away. Can I be any more emotional? It’s just a house. “It’s cleansing the hell out of me, that’s for sure.”

“Maybe,” Sawyer says as a truck pulls up next to my SUV. “That should be Todd. He’s going to help me unload the trailer.”

“We both wanted to,” he says. “Seriously, Alma, just tell us where you want the stuff and we’ll put it there. No questions asked. The Villier brothers are here to help.”

“Oh, Sawyer, with words like that, you’ll have women lined up from the main road for days,” I say, laughing as I wipe the tears from my face. I’m happy for the change between us, as if we’re back to the way we’ve always been. Friends.

I laugh just as Todd knocks on the door, asking if anyone is home. But Sawyer’s not laughing as he watches me. He’s serious.

← Musings Over Coffee: He’s Okay
There Are Worse Things I Could Do →