Two weeks ago, we put away the portable air conditioner because, you know, fall is here. Or it’s supposed to be. Well, today the temps hit the three digits and tomorrow this is what we have in store for us living in Los Angeles. 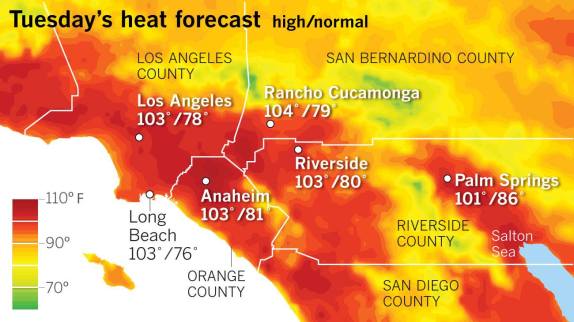 Yup, can you say hot?

So today, without an A/C in the house, I finished up the newly proofread version of Falling for Jordan for my ARC readers and then… I crashed. Like, I actually took a nap for an hour because I just didn’t feel well. At least, it was cool in the bedroom still and with the fan blowing, I had my nap which surprised everyone in the house because this girl does NOT take naps at all.

So with Falling for Jordan on their way to ARC readers, I’m taking a deep breath and letting it go. I thought I’d let it go a few days ago but I was wrong. So now it’s done and dusted and I can tackle the next story in the queue.

Speaking of stories, I thought I found the perfect picture for one of my characters last night. Perfect profile, hand against his tattooed chest and scars along his torso. Who knew I love looking at scars but I do. And then I scrolled down his six-pack abs and realized the picture kept going to show not only his prosthetic leg but something else related to the male anatomy. Totally NSFW (not that I’m complaining). Look up Michael Stokes on Twitter and you’ll know what I mean. You can also click on the image but be warned, it’s NSFW.

Unfortunately, after much consideration, I can’t use the image because it doesn’t fit my branded series at all so for now, it will serve as inspiration. But boy, I love the whole composition of those tats and scars.

So what’s next on my plate? Ideally, Gareth’s story follows Ashe Hunter’s story in Loving Riley, especially since I have about 10K words written already from two years ago. Yes, it’s been that long since I wrote their stories which means I need to get it done. They may not have left me yet but I have a feeling they’re ready to go.

I also have two other stories I need to get done as well. One is a historical romantic suspense novel I wrote more than two years ago (72K words so far) that Carly is familiar with and the other is Swept Away, a romantic suspense novel that clocked 30K words before I shelved it so I could write Everything She Ever Wanted. It also dealt with a dark history of childhood sex abuse and I realized that I couldn’t tackle it then. Not yet. Actually, both of them do and I guess they’re what you call dark romance.

If you’ve noticed, I no longer do the whole, “I’m going to publish six novels in the next six months” thing. I no longer do the whole numbered list to represent my goals. I did at the beginning of this year before reality smacked me in the face and I met only one or two of those goals. The rest of the time, I hated myself for failing all the others which set me up for more failure and doubt – and that’s a terrible way to live your life. So from here on, it’s taking one project as they come. If I publish one more book before the year ends, good. If not, that’s cool, too.

But always, I’ll write my stories. It keeps me sane… which is good for everyone.

3 thoughts on “Done and Dusted… and a Heat Wave”