What can I say? I’m hooked.

But I’ve also been hooked on it since it first came out seventeen or so years ago when all you had were paperbacks. I remember reading it and going, Whoa! Who is this Neil Gaiman guy because he is amazing!

I carried that book with me everywhere I moved until one day it disappeared. Maybe I loaned it to someone like I loaned a signed copy of Frank McCourt’s Angela’s Ashes and she got let go from the office before I could get it back. I don’t know, but when I got my first Kindle reader, that was the first book I bought. One thing I do hate is that because I have automatic updates set up, Gaiman has since updated the text and now they have the cover reflecting the Starz series. I actually prefer the old cover because it reminded me of the book I fell in love with, even if it dates me but that’s just me.

Still, the series is a tour de force. I don’t know how loyal they’ll be to the book but I hear they’ll be taking a few liberties here and there just because they can. One example is Orlando Jones’ monologue as Mr. Nancy, the representation of Anansi, the trickster god where he adds in the bit about the police. It’s timely, yes, but it just made me wonder.

I do love the way they translated Bilquis scene from page to screen in the first episode. I never could imagine how it could be done but they did it. And they did it well (that first episode, not the second episode where they kinda did it just for shock value – like, c’mon, we got it the first time and the effect was shocking; we don’t need to see it done two, three… four more times). Bilquis, by the way, is the Queen of Sheba, the goddess of love who, while living in the modern times, is a prostitute.

And then there’s the scene with the dick pic… I don’t know what to think about that except it was done for shock value again especially when I have family who just happened to hover over my shoulder the moment it appeared – and appeared again in case I didn’t see it the first time (I did! I didn’t even blink because sadly no one sends me dick pics LOL). It’s definitely a show you can’t watch with kids around, and so I watch it on my phone – with headphones on because you sure can’t watch it with kids around with the sound on either.

But the casting is perfect. Ian McShane is the perfect. Mr. Wednesday, and then there’s Shadow Moon. He’s perfect, too. Peter Stormare as Czernobog is perfect and the soundtrack is impeccable because even though I already know what’s going to happen, thanks to that darn soundtrack, I still feel dread for Shadow’s fate.  And Gillian Anderson as Lucille Ball? Well, perfect again.

But it’s best to read the book first and see what it’s all about before the producers take whatever liberties they’ll continue to take with the book. 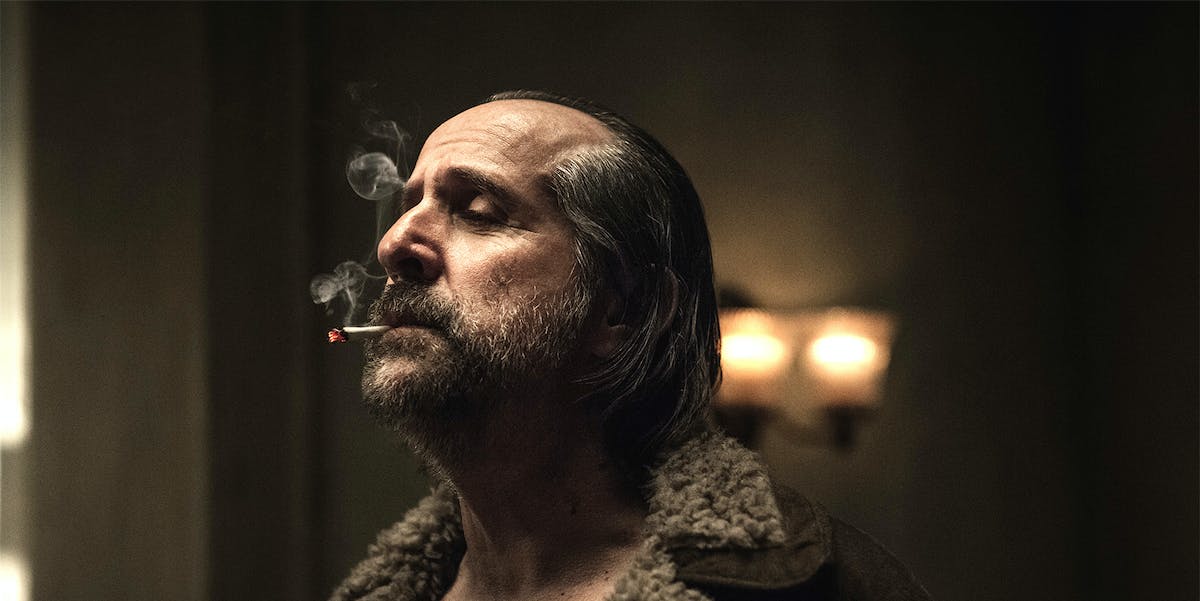 Peter Stormare (you’ll remember him in Fargo) plays the obscure Slavic god Czernobog or “Black God”. But if you think you haven’t heard or seen Czernobog before, he was in Disney’s “Fantasia,” the devil-like creature with the horns…

EDITED TO ADD: Nothing wrong with the dick pic. It was okay the first time they showed it; in fact, I expected it the moment the phone came into view because hey, what else do people chat about? But the second time? Nah. Now I wonder whose dick they had to use among the cast, crew… volunteers?

← Writing Advice that Resonates
Musings Over Coffee: We’re All Too Young to Die →