A Curated Tour – Excerpt from Everything She Ever Wanted

I first learned about Earthships back in 2004 and fell in love with the concept of sustainable living, building houses off the grid using materials we throw away like tires which are then packed with soil and stacked one on top of the other to line the walls and form the foundation, the indoor garden of vegetables and even fruit trees (small ones, of course), and bottles that become part of walls, reflecting light from the outside.

While digging for pictures that I took when I stayed at the Phoenix years ago, I found a few of the interior like this bathroom that I absolutely love.  The windows at the top right of the photo open up via a pulley system for circulation. 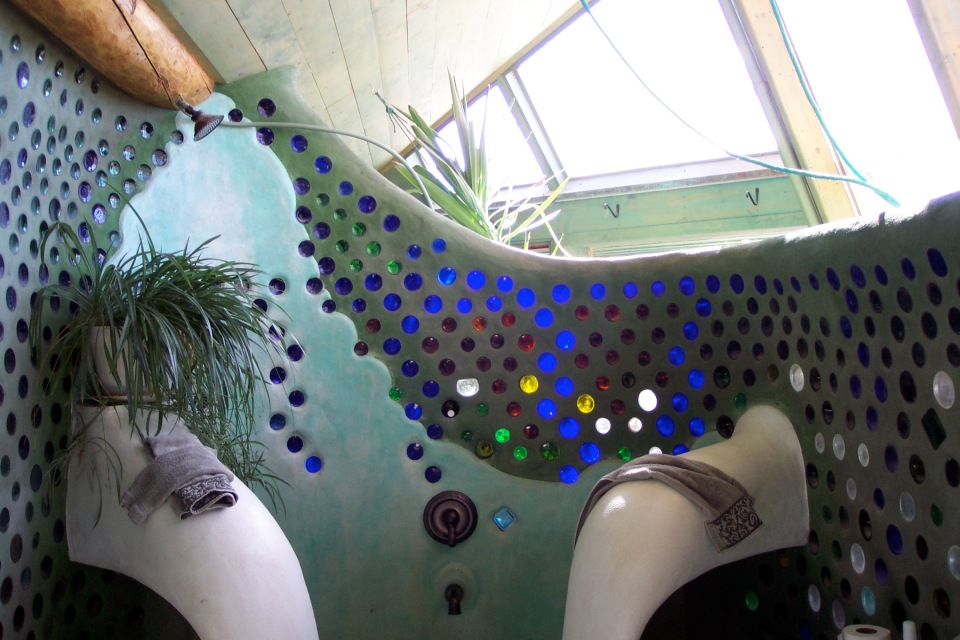 Here’s an excerpt from the book.  Dax drops Harlow back to the Pearl after having dinner with him and his family.

The path to the Pearl is lit up by solar lights that line the driveway all the way to the outdoor patio with its central fire pit perfect for roasting marshmallows. I had wanted it to look like a pearl in the middle of nowhere, and it sure does.  But for the life of me, I have no idea what a city doctor like Harlow James is doing out here when she could be staying at the resort spa in town, complete with room service, a heated pool, and in-room massages.

“Thank you. I really appreciate this,” Harlow says as I park the truck by the side of the Earthship and turn off the engine.  “Would you like to come in?  Sarah said something about your tools being in here, and I thought…”

“Come in, anyway,” she says, cocking her head towards the front door. “Show me around.”

“Didn’t my grandmother give you a tour?”

“She did,  but I’m sure it’ll be different coming from the man who built it. So show it to me, anyway, unless it’s past your bedtime and you’re expected to be back home by now.”

Was that a challenge? “Nana might get away with telling me not to eat with my mouth full, but no one can tell me when to go to bed.”

Harlow pushes open the passenger door, before turning to face me. “So come on in then, unless you don’t want to.”

“Twist my arm now, why don’t you?” I joke though I don’t miss the playful glint in her eyes and I know I’m in trouble.

Everything She Ever Wanted – A Different Kind of Love Novel is scheduled for release on October 18 (maybe even sooner!) and you can pre-order your copy now.

Category: everything she ever wanted

Tags: a different kind of love, dax drexel, everything she ever wanted, excerpt, liz durano